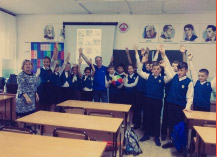 Please join us for the fascinating story of BIROBIDZHAN — a remote and forbidding territory in Russia’s far east, known as the Jewish Autonomous Region. Was it set up as Stalin’s diabolical or benevolent answer to the “Jewish question”? What has happened to it and its dream of a Yiddish-speaking land since?

Birobidzhan has one of the most interesting histories related to Russia and the USSR, and to Yiddish culture in particular. Known as the Jewish Autonomous Oblast (Region) (JAO), it was established in 1928 by Stalin for a host of strategic reasons pertaining to securing the sensitive border with China, and ostensibly for the benefit of Jews to be “more productive members of society”, i.e., farmers. It has the unique distinction of being, along with Israel, one of the world’s two “Jewish territories”.

The story of Birobidzhan — its creation, the rise and fall of the Jewish population and the Yiddish language with it (not always in tandem); its political and social history as relates to the idealistic movements of the 1st half of the 20th Century, the Stalinist purges, the Holocaust, the creation of the State of Israel, anti-Semitism, and the collapse of the USSR; and the current situation of Jews and Yiddish culture — provides a fascinating glimpse into a unique political/social/ethnic experiment that is both a colossal failure and a surprising colossal success.

Nikolai, aka Kolya Borodulin is a post-War native son of Birobidzhan and a product of its Yiddish schools.  His own personal history is a telling depiction of both the struggles for and pride in Jewish and Yiddish cultural identity within the USSR and post-USSR.  By training an educator and scholar, he is at present one of the most active individuals and innovators in the world in preserving the Yiddish language.

In summer of 2018, Mr. Borodulin returned to Birobidzhan for the first time in 24 years.  He encountered a much-diminished Jewish population but also the continued threads of Yiddish cultural activism, the same ones that had given rise to streets being named after famous Yiddish writers and Yiddish schools being established at all levels of learning.  The Birobidzhaner Shtern, the Yiddish-language newspaper initially published in 1930 to cater to newly arriving Jewish immigrants, still publishes in Russian with two pages per week in Yiddish – the only newspaper in all of Russia with Yiddish content, and the second only one in the world.

In addition to providing a historical overview of this unique region, Mr. Borodulin’s multi-media lecture will be able to address this history from the personal perspective of one who grew up during its post-War turbulent history within a society that clung at all costs to its minority cultural heritage.  But he will also be bringing us up to date about the current status of population, culture, and political trends in the JAO. 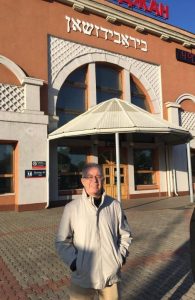 Kolya Borodulin is the Master Teacher and Coordinator of Yiddish programming at Workmen’s Circle/ArbeterRing, New York. He teaches Yiddish language and culture to multigenerational audiences nationally and internationally and is credited with giving hundreds of Yiddishists their foundation in the language. His dynamic style has garnered a growing fan base across the United States and beyond. He is the organizer of Trip to Yiddishland program ( and Yiddish programming coordinator at Klezkanada. Kolya is the author of “Yiddish Year Round – a curriculum for the young beginners” and a number of Yiddish educational materials for children. He also pilots the highly successful Workmen’s Circle online live Yiddish classes “Yidish fun der vaytns”.