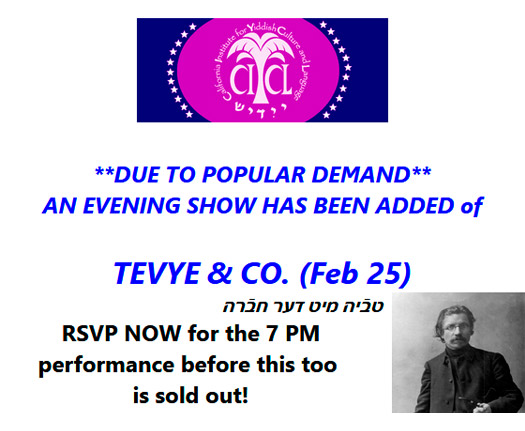 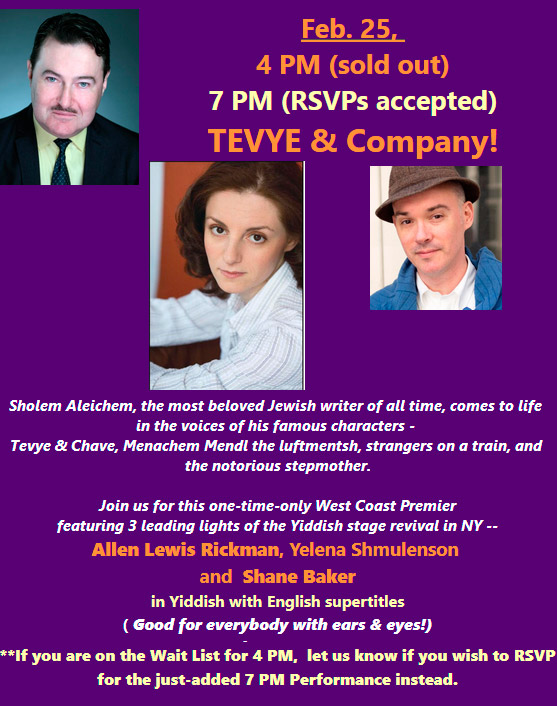 ALLEN LEWIS RICKMAN is an actor, writer, and director, whose credits include the Coen brothers’ Oscar-nominated A SERIOUS MAN, Barry Levinson’s YOU DON’T KNOW JACK (with Al Pacino), John Turturro’s FADING GIGOLO (with Woody Allen), and recurring roles on BOARDWALK EMPIRE and PUBLIC MORALS. He co-adapted and directed the Drama Desk-nominated Yiddish PIRATES OF PENZANCE, and has acted on Broadway, Off Broadway, in regional theatre, and in Yiddish theatre. Plays he’s written have been produced in France, Denmark, Spain, Luxembourg, Sweden, and New Jersey; among those published is his revue THE ESSENCE: A YIDDISH THEATRE DIM SUM, which appeared in the anthology “Yiddishkeit”.

SHANE BAKER is Director of the Congress for Jewish Culture, a 70-year old Yiddish arts organization in New York City.  In 2016 he completed a world tour on behalf of the Congress with performances, lectures and classes celebrating Sholem Aleichem’s 100th yortsayt.  In 2016-17 he appeared to great critical acclaim in the off-Broadway Yiddish production of GOT FUN NEKOME (God of Vengeance); and as Vladimir in his own Yiddish translation of Samuel Beckett’s WAITING FOR GODOT for the play’s Yiddish world premiere in two Off-Broadway runs and tours to Enniskillen, Northern Ireland and Paris, France. He recently appeared (in English!) in Charles Ludlam’s CONQUEST OF THE UNIVERSE, OR WHEN QUEENS COLLIDE at La Mama in New York.